This year the Evil Sky Fairy decided to forbear from trashing the Make Merry; accordingly, the rain had cleared up by the time the Make Merry was officially opened at noon, and for most of the afternoon remained bright and sunny. Plants, books, homemade brooches and other adornments, cards and a few select items of objet d’art (or toot, depending on your point of view), helped to pull in the customers. Andrew picked up his paintbrushes later to work on a scene of the Slade Pond as further enticement to linger. 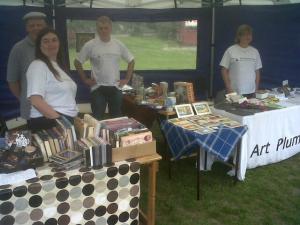 We also ran the information stall on behalf of the Make Merry team, as they had enough to do with stewarding the event, in return for being given use of their gazebo. Next Year’s Make Merry will be the 40th, so do consider now whether you could give a couple of hours to help make it a resounding success and contact them nearer the time – or now, if you are a good organiser and can help with planning.

Mayor Angela Cornforth assesses our stall before making her purchase.

The Mayor, Angela Cornforth visited every single stall before making her decision; we were somewhat surprised to be told to make ourselves available at the stage for the imminent announcement of the prize for best dressed stall which we had won. It was a well-attended Make Merry, and we had a steady stream of visitors. The forthcoming Midsummer Stroll was promoted and plenty of people left their details to be kept informed of future Art Plumstead events. We also raised a fair bit of money for future projects and reunited a boy with his lost mobile phone – it was quite a saga – so all in all, it was a very busy day for Art Plumstead, but a successful one. 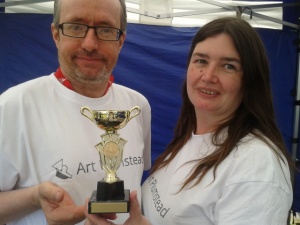 Erik and Karen display our cup back at base