After assembling at the Apni Haveli – formerly The Woodman, and sampling the poppadoms and the meat and vegetarian samosas, the midsummer element of the evening began in the yard outside, attaching the first symbol (earth) to the wearable wreaths sourced from locally foraged materials.  Friendly passers-by were rewarded for their interest by being presented with their own wreath to wear or take away, complete with the full complement of symbols and complementary tubs of bubble mixture. We then proceeded to the Who’d a Thought It?, blowing bubbles as we went, before attaching the second symbol (spirit).

Using the back way, we continued to The Star, where the barmaid was pleased to receive and wear a specially completed wreath. The symbol for that pub was fire, depicted by circles of orange peel attached to yellow card. A raucous chorus of ‘I’m Forever Blowing Bubbles’ seemed like the thing to do and was delivered with gusto, followed by a cheer for West Ham. From there it was a short hop to The Ship; element – water. The last time a strawberry moon coincided with the summer solstice was in 1967, the year the film The Happening was released. Gary Botting, the Canadian theatre critic and playwright, who himself had “constructed” several happenings, wrote in 1972: “Happenings abandoned the matrix of story and plot for the equally complex matrix of incident and event.” How appropriate then, that Karen should discover a discarded rubber strawberry in the pub and manage to coax it back into pulsating life, before it was seized by Alison and worked mercilessly to create a create an ever-changing light show. 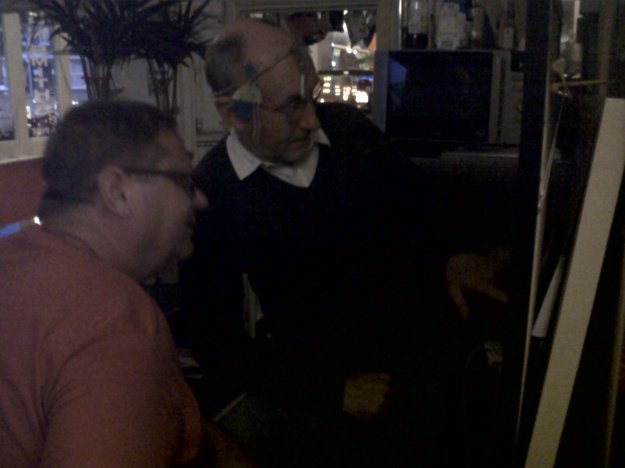 The evening concluded with admiring the one day post-strawberry moon en route to The Old Mill, where the final element (air) was attached to our wreaths. The newly paved back yard became scene to a further bout of bubble blowing and further general horsing about with much discussion of future ideas for midsummer themed events. Plumstead was a happening place to be this midsummer, thanks to Art Plumstead.